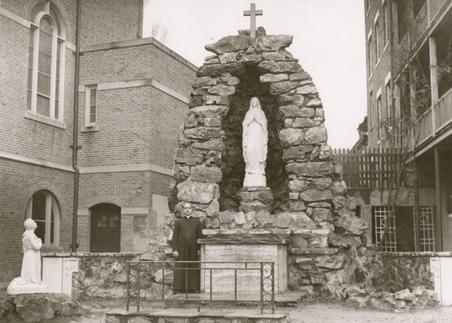 The Salem Community Arts Center (SCAC) is seeking funding to restore the Grotto of Our Lady of Lourdes that originally stood to the right of St Mary Italian Church of Salem and that we plan to rebuild at St Mary's Cemetery in Salem, MA.

The Grotto, which was built in 1945 by local artisans, has historical and cultural significance. Salem's Italian-American community started taking residence in the area between Norman, Margin and Jackson streets around the turn of the 20th century with the population growing after the Salem Fire of 1914. Their contributions of time and money helped build St Mary Italian Church (erected 1925) and fill it with tributes to their families. Those tributes were lost in 2012 when the property was leased by another religious denomination which painted over the murals and frescoes, removed the stained glass windows, and sledgehammered the marble altars. Statues from the Grotto were also damaged--one was beheaded. SCAC was eventually able to remove the Grotto statues, disassemble many of the key elements of the Grotto and store them safely.

St Mary's Cemetery has granted us a prime area on a hill that overlooks its grounds where the Grotto can be rebuilt. The new Grotto will be dedicated to the Salem Italian-American community. Many generations of that community lay at rest in this very cemetery.

The SCAC was originally formed with the purposed of saving St Mary Italian Church, purchasing it, and turning it into an arts and cultural center. Though efforts to raise the necessary funds to accomplish that goal came up short, we did ward off a planned gutting and housing conversion of the building. We have enough monies to do initial Grotto work to erect the main statue. We need additional funds to restore the beheaded statue and other elements, purchase materials and rebuild the Grotto walls.

Since 2003, St Mary Italian Church has been listed as endangered by Historic Salem, Inc. and the Grotto is the lone remaining element that is in the control of members of the local community. Though the church still stand, it is a shell of its former self. Which is why we are doing what we can to preserve the Grotto.

Donations for the St Mary Italian Church Grotto Fund can be made payable to the Salem Community Arts Center and be mailed to 35 Congress Street, Suite 305 in Salem, MA 01970.